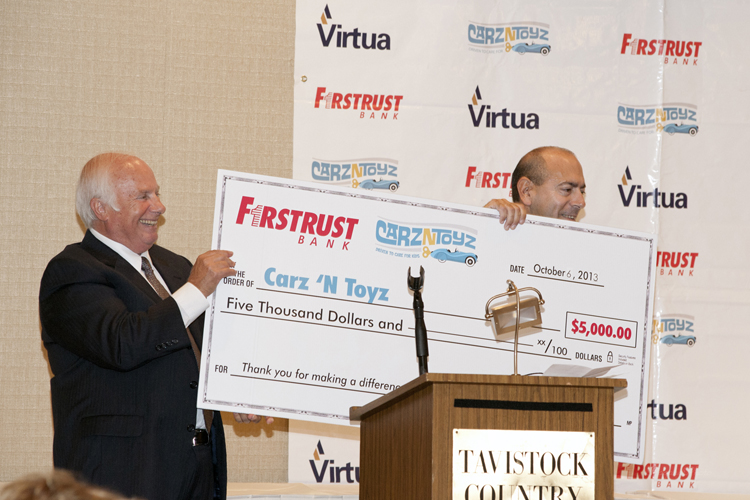 On October 6th, Carz N Toyz held their annual Charity Dinner and Auction for the benefit of children under the care of Virtua, South Jersey. The dinner, held at Tavistock Country Club attracted 150 charitable guests, besting last year’s attendance by fifty-percent. Carz N Toyz treasurer, Bob Paglione, stated that approximately $30,000 was raised over and above the $5,000 Firstrust Bank sponsorship. The auction, alone raised over $8,000, highlighted by a drivable toy Lamborghini donated by F.C. Kerbeck in Palmyra.​

Guests enjoyed a gourmet 4-course dinner and were treated to entertaining and informative speakers, like the CEO of Virtua, Richard Miller, and Dr. Kathryn Gollota. Dr. Gollota who spoke about Virtua’s new concussion management program for young athletes. Carz N Toyz will support this program throughout 2014 and has already donated $10, 000 to the program this year. Guests were particularly interested to hear Kelly Niestedt, AVP of Women’s and Children’s programs at Virtua, talk about how their contributions help the children. She eloquently relayed several moving stories about how Carz N Toyz toy contributions have directly impacted children and their families in a positive way. Judging by the smiling faces in the audience, next year’s dinner should be even bigger.​

Carz N Toyz will put an exclamation point on 2013 with the December 7th Toy Run. It starts at 8am at Aldo Lamberti’s, Rt 70 Cherry Hill where a continental breakfast will be served. Attendees need only bring an new unwrapped  toy. A truck, provided by Pellegrino Chevrolet, filled with more than 1,000 toys and books and will lead a caravan of car enthusiasts to Virtua, Voorhees, where the toys will be delivered to the children. All are welcome to join the caravan.